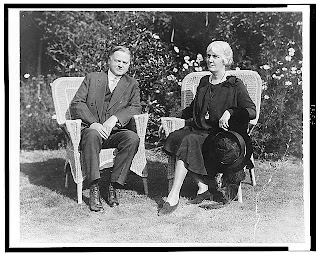 
On March 28, 1874, Lou Henry was born in Waterloo, Iowa to banker Charles Henry and his wife Florence. The family moved to California 10 years later. Lou was skilled in athletics and possessed an analytical mind and an independent spirit. She was the first woman to graduate from Stanford with a geology degree.


Marrying her engineer husband in 1899, she traveled widely with him and became a cultivated scholar and linguist. During World War I, Mrs. Hoover helped him in providing relief for Belgian refugees. As First Lady, she oversaw construction of the presidential retreat at Rapidan Camp in Virginia. She was the first First Lady to make regular radio broadcasts to the Nation. She was president of the Girl Scouts of the USA in 1922-1925 and 1935-1937.


By the time he graduated the following June, they had reached an understanding but put off wedding plans while she continued her education and he pursued his engineering career in Australia. From there in 1898, the year she graduated from Stanford, Hoover cabled a marriage proposal, which she promptly accepted by return wire. Although raised an Episcopalian, Miss Henry decided to become a Quaker.  But because there was no Quaker Meeting in Monterey, they were married in a civil ceremony performed by Father Ramon Mestres, a Roman Catholic priest of the San Carlos Borromeo Mission.


Both Hoover and Lou Henry were aged 24 when they married on February 10, 1899, at the home of the bride's parents in Monterey, California. The next day they sailed from San Francisco for Shanghai, China where they spent four days in the Astor House Hotel. The newlyweds soon settled into their first home, a large house in Tianjin. Hoover's job required extensive travel throughout remote, primitive and dangerous areas, which they did together. Mrs. Hoover was present with her husband during the Boxer Rebellion. Possessed of a natural ear for languages, she became quite proficient in Chinese. In the White House, at times, the Hoovers would converse in Chinese to foil eavesdroppers. To date, she is the only First Lady to speak an Asian language.

Mrs. Hoover also distinguished herself by becoming the first First Lady to broadcast on a regular basis. While she did not have her own radio program, she was a guest speaker on a number of occasions from 1929 through 1933, often advocating for volunteerism, or discussing the work of the Girl Scouts. Radio critics praised her for having an excellent radio voice and for speaking with confidence.

Mrs. Hoover was also well versed in Latin; she collaborated with her husband in translating Agricola's De Re Metallica, a 16th century encyclopedia of mining and metallurgy. The Hoover translation was published in 1912, and is still in print as the standard English translation.

During World War I, she assisted her husband in providing relief for Belgian refugees. For her work she was decorated in 1919 by King Albert I of Belgium. 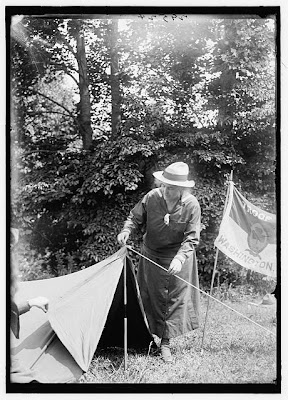 While Hoover served in the cabinet of Presidents Harding and Coolidge, she was active as national president of the Girl Scouts of the USA. Camp Lou Henry Hoover in Middleville, New Jersey, is named for her and run by the Heart of New Jersey Council of the Girl Scouts. The Lou Henry and Herbert Hoover House in Palo Alto's foothills is now the official residence of the President of Stanford University. It is located near the campus's Hoover Tower, home of the Hoover Institution, and is designated a National Historic Landmark. Lou Henry Hoover Elementary School in Whittier was built in 1938 and was named in her honor. In 2005, Lou Henry Elementary School was opened in her honor in Waterloo. One of the brick dorms known now as "The Classics" at San Jose State University is named "Hoover Hall" in her honor. 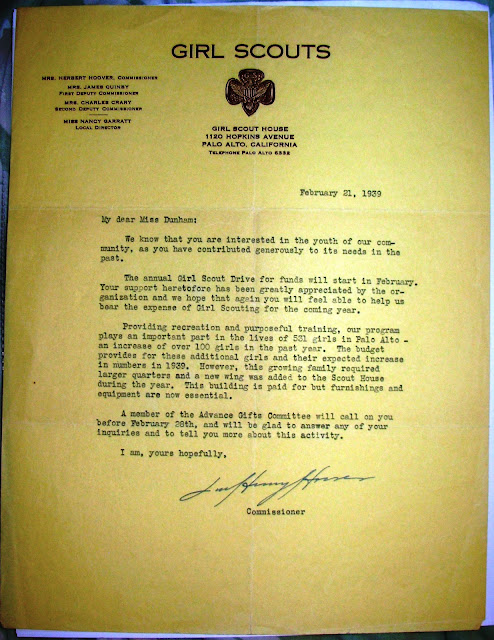 As First Lady, she discontinued the New Year's Day reception, the annual open house observance begun by Abigail Adams in 1801. She played a critical role in designing and overseeing construction of the presidential retreat at Rapidan Camp in Virginia.

Mrs. Hoover died of a heart attack in New York City on January 7, 1944. She predeceased her husband by twenty years, and was originally buried in Palo Alto, California. Following her husband's death in 1964, she was reinterred next to the president at West Branch, Iowa.

The Congressional Evolution of the United States of America

Presidents of the United States of America

Capitals of the United Colonies and States of America

Book a primary source exhibit and a professional speaker for your next event by contacting Historic.us today. Our Clients include many Fortune 500 companies, associations, non-profits, colleges, universities, national conventions, PR and advertising agencies. As a leading national exhibitor of primary sources, many of our clients have benefited from our historic displays that are designed to entertain and educate your target audience. Contact us to learn how you can join our "roster" of satisfied clientele today!

Primary Source exhibits are available for display in your community. The costs range from $1,000 to $35,000 depending on length of time on loan and the rarity of artifacts chosen.

No Taxation Without Representation

US Bill of Rights

*** President of the Confederate States of America